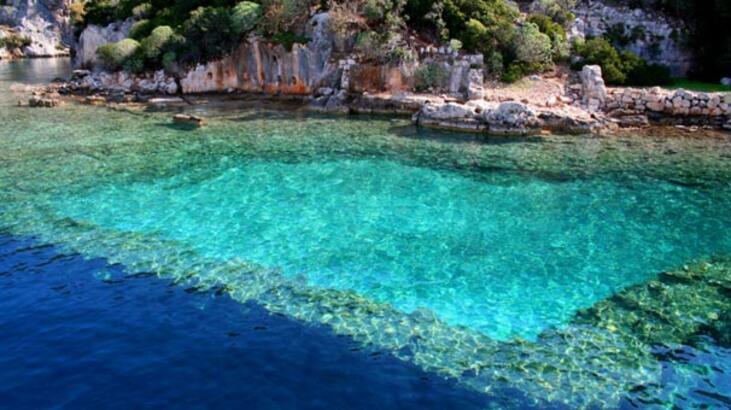 Kekova, located in Demre district of the southern province of Antalya, welcomes thousands of local and foreign tourists every year.

In his book “Our Mediterranean,” famous writer Falih Rıfkı Atay, says “If there is paradise in this world, it is the Mediterranean coast from Antalya to Fethiye. But it is rumor that that the heaven is Kekova.”

The Üçağız neighborhood of Kekova, which is the center of Demre, is known as the Greek fishing village in the past. Structuring is forbidden in Üçağız, which is a first degree natural and historical site located in a natural harbor bay and full of historical ruins.

Especially with the necropolis on its shore, the Lycian sarcophagi and its stone houses, Üçağız is an ideal place for holiday and can be visited by yacht tours. The ancient city of Theimussa, one of the small cities of the Lycian Union, is located in Üçağız, which is the only place in the Kekova region that can be reached by road.

Kaleköy is one of the most popular places in the region.

Kaleköy is one of the rare places in Turkey which is on a land but cannot be reached by road.

Kaleköy, which is a frequent destination for Mediterranean enthusiasts who go on a blue cruise from Antalya and Aegean, and for those who go on daily yacht tours from Demre’s Çayağzı Port, Üçağız District and Kaş, fascinates with its structure and history.

Vacationers who stay in a few hostels there wake up in the morning only to the sound of birds and the sea.
Simena Castle, which resembles an eagle’s nest and dates back to the 4th century B.C., welcomes those who come from the sea.

Those who climb through the ancient artifacts and stone houses to Simena Castle, which is 400 meters above the sea, can watch the magnificent view around.

There is the smallest Roman amphitheater in Turkey is located in the castle. At the top of the castle, an Ottoman cannon, which was removed with the contributions of businessman Rahmi Koç, witnesses the history.

The walls of the castle, which has survived until today, are intact. While climbing up, the productive women of Kaleköy sell handcrafts and natural products. Ice cream made from goat’s milk unique to Kaleköy is also sold there.

Possible to see hundreds of amphorae

Located right across Kaleköy, the Sunken City waves its hands to Kaleköy with its history living in and out of the water. There is a history lying underwater in Sunken City. On days when the sea is calm, it is possible to see hundreds of amphorae under the water from the mirrored sections on the yachts. In the Sunken City, there are hundreds of historical shops and residences.

Every bay in the Kekova region is described as a paradise. However, the Gökkaya Bay in Demre has the characteristic of a natural harbor. Aşırlı Island, where the mountain goats and Korsanlar Cave are located next to the bay, fascinates with its natural richness.

Tersane Bay, Aperlai Bay and Aquarium Bay in Kekova are magnificent bays where history meets sea and nature. There are shops submerged in the sea in Tersane Bay.

Kekova Island, which gives its name to the Kekova region, is a deserted and uninhabited natural and historical site of the first degree.

The Kekova region has become a popular destination for diving enthusiasts in recent years. Kekova, which has a rich history and underwater life, also has a few shipwrecks.

Transportation to Kekova is provided by boats from Demre’s Çayağzı Port, Üçağız Mahallesi and Kaş. It is known that around 1 million local and foreign tourists visit the Kekova region in normal times.

PROPERTY FOR RENT & FOR SALE IN KEMER ANTALYA

LAND FOR SALE WITH 20 / 40 CONSTRUCTION PERMISSION IN CAMYUVA, KEMER , ANTALYA.

920.000 EUR
ANTALYA / KEMER
VILLA
FOR SALE
ITEM NO #8
DETAILS
SHOW ALL
Mira 32 ® 2016 All content belongs to Mira32 located on the website. In case of unauthorized use or copying will start legal action.