Statue of woman found in Patara 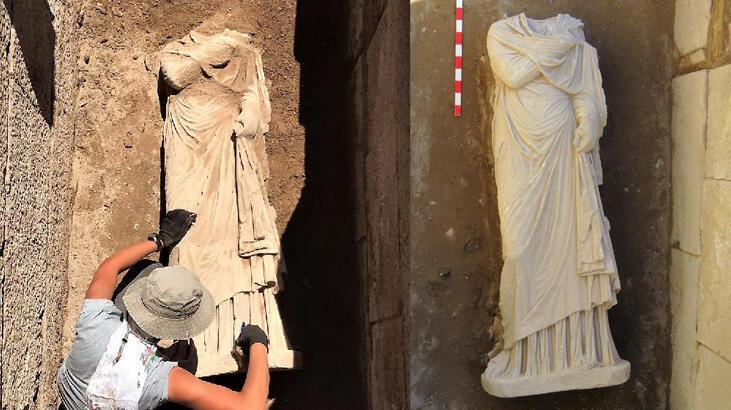 Stating that together with the Roman-era 1.57-meter-tall headless statue, the number of statues unearthed during the excavations of the ancient city’s theater stage building reached 10, the head of the excavations, Professor Havva İşkan Işık, said that since the number of sculptures remaining from ancient Lycia to the present day is very small, every statue found is very valuable for Lycian archeology.

Excavations in Patara in the southern province of Antalya's Kaş district have been ongoing since 1988. The statue was unearthed on May 14, said Işık.

Explaining that the construction of the stage building of the Patara Theater was started by Quintus Vilius Titianus, one of the leading citizens of the city at that time and completed by his daughter Vilia Prokla after his death, Işık said that she placed many statues there. She said that they thought the head of the statue featured the wife of an emperor or Prokla herself or a family member.

“Scientific research will focus especially on whether the works are made by local masters or artists from other schools,” she said.

Stating that the works in front of the Patara Theater stage building match with the finds revealed in the previous excavations, Işık said that all the sculptures were made in line with a certain concept, and the research and the identification of the figures will be realized  within the scope of a project.